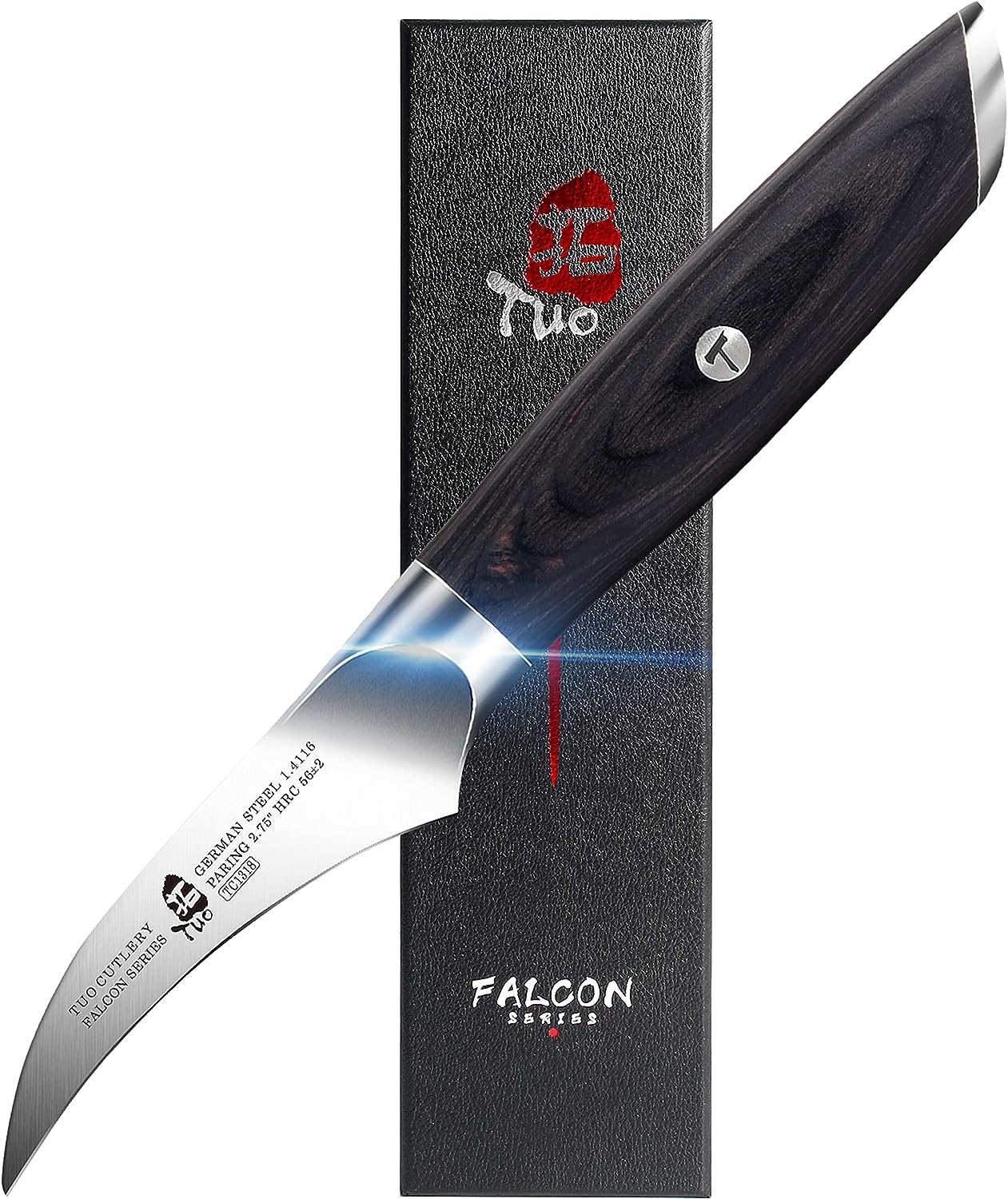 This fits your .
"li" ð COMFORTABLE HANDLE: All Tang and rivets enhance the strength, durability and controllability of the handle, and the blade and handle are well balanced. The hand-polished Pakkawood handle achieves a satin finish, providing you with a comfortable grip. "li" ð WELL-DESIGNED STEEL KNIFE: German steel blades are sharpened carefully, resulting in a sharper blade edge. Rockwell hardness has reached 56+, enhancing the durability of the blade. You can get a paring knife that makes your work more efficient. "li" ð SURPRISING KNIFE: Comes with a lifetime warranty, you can rest assured to use a high-quality paring knife, and the packaging box is an existing gift box, which can be a beautiful and unique gift with a little decoration.

How we got our start?

Ten years ago, we started our journey by producing cutlery. With our sincerity, enthusiasm, amazing technology, and the spirit of continuous learning, we gradually expanded our brand influence to abroad. These factors also allow us to produce many excellent quality, customer - welcomed knife series.

What makes our product unique?

There are countless knife brands in the market, and it's uneasy to be success. By being progressive, our products has come to the fore, this is because we have experienced craftsmen, innovative designer, scientific and advanced producing method, whatâs more, each of our members has a positive heart.

Why we love what we do?

The members of TUO cutlery have the pursuit of beautiful design, we have the same goal, working together in the same direction, which makes us have a good team atmosphere. We are committed to the good cooking to every family, so that more people can experience the wonderful cooking process.
"h2"Product Description

They have simple design and practical functional, can handle most of tasks in the kitchen, whether in home or restaurant.

Small Kitchen Knife with Big Use

Whatever the size of a kitchen knife, has its own role. Just like this paring knife, only 2.75 inches, but peeling, cutting, carving, trimming fruits can be done. Of course, its size is more suitable for in-hand detail work.

The 56+ Rockwell hardness of this peeling knife provides durable performance. With the sharp blade, you can enjoy every smooth cutting when you use it. A good helper in your kitchen!

Made of High Quality German HC Steel, this kind of steel have excellent performance in rust, corrosion and discoloration resistance. This also means that the knife will have a long service life.

The blade is vacuum heat treated, tempered with nitrogen, and polished by hand by experienced craftsmen, so that the sharpness of the blade is up to 8-12Â°. Such a sharp edge allows you to feel the cut feeling like cutting butter.

You can grip this paring knife with safety, because the bolster of TUO Falcon knife has been carefully polished by experienced black smithes, its curve is very slippy and smooth.

The bolster can not only connect the blade and handle steadily, but also protect your fingers from tired and numb, your fingers will feel comfortable.

With this smooth bolster, your using process will be more easier.

Each handle is made of Pakkawood, a material that comes from Africa, and is known for its comfort, strength and stability.

Pakkawood handle fits the palm of hands, which can prevent your hands become tired after long time use and provide a cozily grip sense.

Features a silvery rivet which engraved a letter âTâ, the initial of âTUOâ. This unique design adds texture to the handle, besides, provides more stability, and the handle would not jiggly when you use the knife.

Come with beautiful gift box, TUO Falcon knife can be your best choice as a festival present for your family and friends, whether for St. Valentine's Day, Helloween, Thanksgiving Day, Christmas Day or New Year's Day!

If you want to add some personal style, decorating your gift box is allowed! You could embellish the gift boxes with metallic wire-edged ribbon, gift twine, decoupage paper or beautiful sticker!

Just decorate the box with your favourite way, making your gift unique!

Founded 20 years ago, we never overlook our stringent company ethos to adhere to our more than 100 crucial steps and standards necessary to produce our superior knives. TUO will maintain our commitment in pursuing the limits of innovation, design and craftsmanship to enhance your experience in your kitchen!

On November 12th, 2020, following a start to the season with just one win out of their first nine, Celta Vigo fired Óscar García and replaced him with 46 year old Eduardo Coudet. In the two months following his appointment, Celta strung together an incredible run of results while implementing a style of play that captivated many fans.

England and the Hammer

The use of simple hammers dates back millions of years ago according to the discovery made in 2012 by Sonia Harmand and Jason Lewis of Stony Brook University. Various shaped stones were used to break down bigger stones, wood or bones.

Penalties and the magician: How Spain came close to reaching the final

A magician not pulling a trick in-front of thousands of spectators doesn’t mean the failure of the magic trick. Behind any magic trick, hours and hours of creativity are followed by more hours of practice. Alone in his room, a magician might perform the trick seamlessly without any interruptions but circumstances on the day of the show can result in the trick not coming off as intended.

Eduardo Camavinga is one of the hottest teenage prospects in European football. Being pursued by Manchester United and linked with Paris Saint-Germain, among other European powerhouses, indicates that the midfielder will not stay at Stade Rennais much longer because there are options for him and he is willing to make the next step. But what are his specialities and contributions?

Ever since Jose Mourinho arrived in England, the importance of the transition phases has increased massively. From the 2010’s onwards this importance has only increased by the likes of Jürgen Klopp and Pep Guardiola who helped to revolutionise attacking and defensive transitions and bring the game of football to a new level.

England’s center-backs and the parallel timelines

In a parallel timeline, Timo Werner scores his chance and Germany are through to the Quarterfinals. Gareth Southgate is ridiculed, and England are once again out of a major competition.

The vein in Spain: A different approach from Spain in possession

Guardiola’s image in the football world is complex to describe. While polarizing, everyone seems at least to agree that he is an unique innovator. Funnily enough, he is polarizing exactly because of this mutual agreement of critics and fans. The public discourse about his Barcelona team mainly revolved about the positional style of play and – even contrasted with Aragones’ successful EURO campaign with the Spanish national team – was highly focused on his idea of playing football and how it differed from most teams. Building up from the back with passes on the ground and involvement of the goalkeeper even under pressure, overload in the center while maintaining high width and depth, or even their extreme pressure with an extraordinarily high line to enable early regain of possession have conquered football back then (with two Champions League titles in four heavily favored campaigns) and since taken over the ideas of others teams more and more – some of them, Guardiola had started already in his first year as head coach back at Barcelona B.

With Tottenham unbeaten in the last six games in all competitions against their North London rivals, Mikel Arteta came into the match on Sunday having to show how exactly he has improved Arsenal in the last year and a half or so.

Lyngby BK and FC Nordsjælland clashed on Friday evening for an important derby. Both teams have underperformed this season; with only two games of the Superliga’s preliminary phase remaining, Lyngby sat second bottom in the table, with Nordsjælland only one position higher. A win would take Nordsjælland into the top half, and, crucially, out of the relegation fight.

Brian: Guys what happened to these type of podcasts? Sundays should always be a time to reflect on games past a...

CT: Oh thank you now it makes sense. I thought an outswinging cross was to attack in front of the defensive l...

UKICRA Sewing Machine UFR-505 - Electric Mini Sewing Machines, 1: I know this if off topic but I'm looking into starting my own blog and was wondering what all is needed t...

Brian: It's funny how people do say that the most dangerous place to be is the Middle of the road. Most of the a...

We use cookies to ensure that we give you the best experience on our website. If you continue to use this site we will assume that you are happy with it.OkRead more